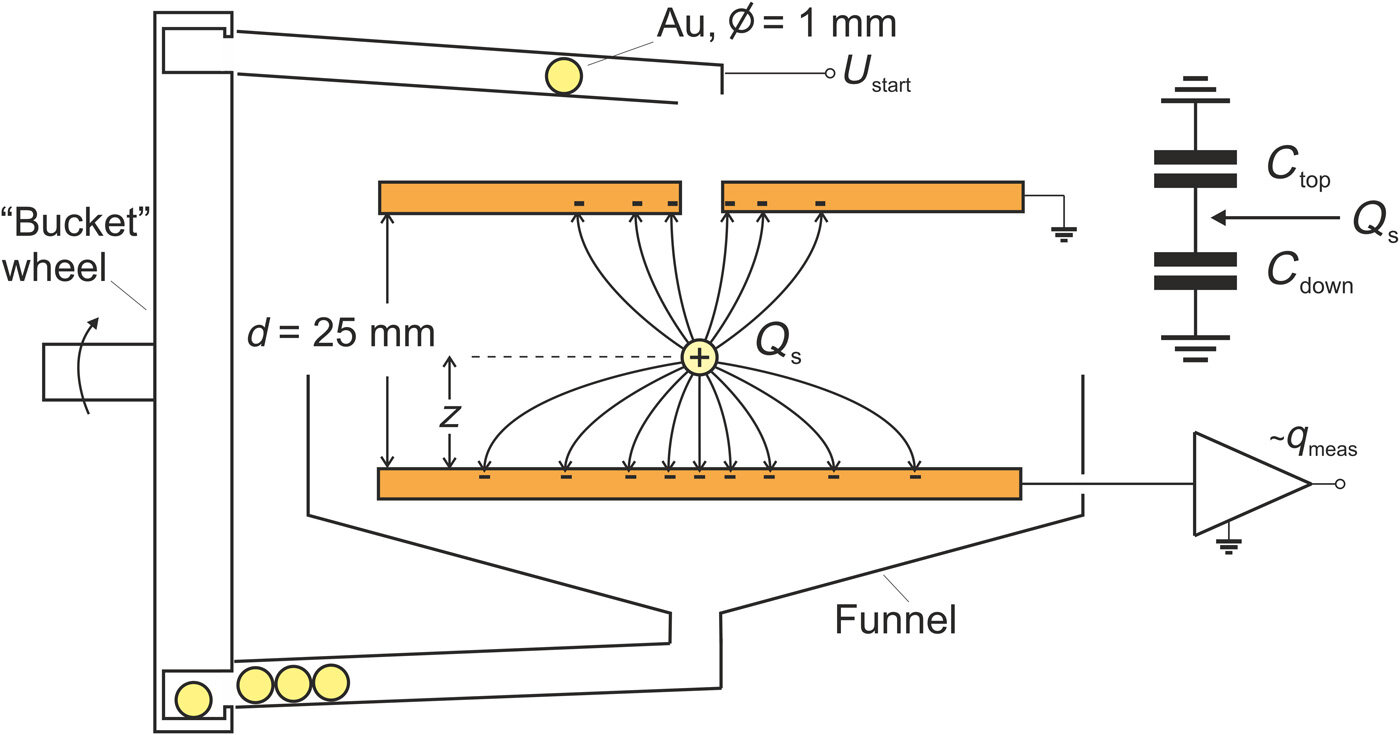 A new report on Science Advances developed by Mirco Kaponig and colleagues in physics and nanointegration in Germany, detailed the very basic concept of contact electrification between two metals. In a new experimental method, the researchers followed the charge of a small sphere bouncing on a grounded planar electrode on a timescale down to 1 microsecond. The team noted how the sphere discharged in the moment of contact lasting for 6 to 8 microseconds. At the moment of disruption of the electrical contact, the sphere regained charge far beyond expectations relative to the contact potential difference. The excess charge arose with increasing contact area.

Contact electrification is a ubiquitous phenomenon that occurs when two surfaces touch. The process is an elementary method of triboelectricity that can be observed directly in daily life. The phenomenon is responsible for lightening in thunderstorms, sandstorms or volcanic plumes. The process can be of major concern when handling potentially explosive liquids or dusts. As a result, researchers have established empirical safety regulations to avoid hazards caused by electric discharges through triboelectric charging. Although the phenomenon was described for more than 2000 years, the underlying mechanisms are still debated. Scientists typically consider three kinds of charge transfer including the transfer of electrons, ions or material with partial charge. In metal-metal contacts, electrons can be transferred between two surfaces to establish contact potential. The amount of transferred charge also depended on the mutual capacity when the electric contact is disrupted, and the observed charge transfer strongly supported the concept of electron transfer for metal-metal contacts. The situation is less obvious for metal-insulator or insulator-insulator contacts. Kaponig et al. therefore presented a new experimental technique to analyze charge transfer during contact electrification, with unprecedented resolution.

The work revealed how the electric potential of a metallic particle bouncing from a metallic surface evolved with time. Based on the outcomes, Kaponig et al. noted how the charge increased with impact velocity in metal-metal contacts; a feature commonly observed with metal-insulator and insulator-insulator contacts but hither to unobserved for metal-metal contacts. During the experiments, this led to unexpectedly high electric potentials for purely metallic contacts. Since the electric contact was only established for a few microseconds during mechanical contact, the process did not retain the parameters of the charge before contact. The potential of the sphere was therefore only reduced to the contact potential of a few tenths of a volt. When the electric contact detached from the surface, however, the charge on the sphere established a potential of up to 3 V for less than 1 microsecond.

Scientists had previously studied the charge transfer of particles bouncing on an inclined surface based on contact-free electrostatic detection. Kaponig et al. therefore developed an experimental scheme to measure the charge before and after surface contact to follow the dynamics in real-time. In the setup, they obtained a resolution better than 1 microsecond in time for about 6000 electrons. They studied the motion and contact electrification by dropping gold spheres that are 1 mm in diameter through a small orifice into a parallel plate capacitor. The spheres bounced on a virtually grounded lower plate, allowing the scientists to measure the induced and transferred charges. The team performed the experiments in vacuum. The signal detected at the lower plate of the setup had two contributions including the charge on the sphere and the charge transferred to the sphere. The team noted the display signal of a gold sphere bouncing more than 15 times on the lower plate of the capacitor made of copper, the trajectory of the sphere consisted of segments of free fall, starting and completing via contact with the plate.

When Kaponig et al. closely inspected the signal, they identified the moments of contact by abrupt changes of the measured charge. They noted how the time spent between two contacts determined the segment of the trajectory. The team next applied a voltage at the ramp to guide the sphere to the entrance of the capacitor, where the sphere was positively charged before it entered the capacitor and became negatively charged during the first contact. The observed magnitude of the charge was unexpectedly high. The researchers then repeated the experiment with different initial charges, where the sphere became negatively charged at the first and following contact. Another key to understand contact electrification included the potential of the sphere. Based on the high magnitude of the charge on the sphere, the team noted a potential of several volts unexpectedly high for a purely metallic system. The electric contact was only established as a mechanical contact for a few microseconds. The potential of the sphere was therefore reduced to the contact potential of a few tenths of a volt. As the distance between the sphere and plate grew, the potential further increased.

The team described the observations using a metal-contact model in which the contact area raised for the first-contact, followed by an enormous capacity formed at the interface due to the minimal distance between the charges. This capacity charged to the contact potential in the order of picocoulombs. Upon contact break, the two adjacent surfaces of the plate and sphere fit almost snugly to form a large area at close separation and a larger capacity, where the size of the area depended on the velocity of the sphere. In this way, Mirco Kaponig and colleagues showed how a metallic sphere bouncing from a metal plate achieved a potential of up to 10 V, due to a deformation of the contact area. This led to an increased capacity between the sphere and the plate upon electric contact disruption. The results are important for contact electrification and triboelectricity for enhanced charge transfer.

A levitated nanosphere as an ultra-sensitive sensor