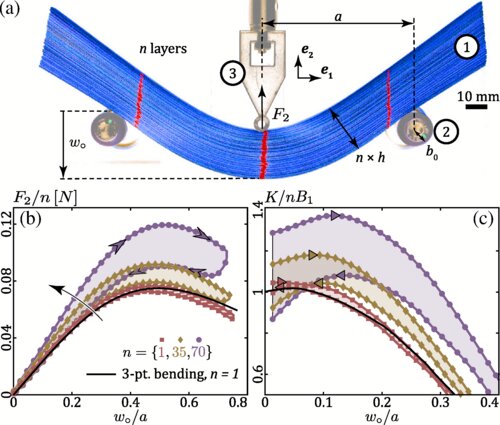 It all started with a shaky washing machine. Pedro Reis, head of the Flexible Structures Laboratory at EPFL’s School of Engineering, rolled up a piece of fabric and placed it under the machine to stop it from moving. After he saw how well the rolled-up fabric worked as a vibration damper, he got to thinking. He spoke with Samuel Poincloux, a postdoc at his lab, about his idea and they soon realized that the physics behind a piece of rolled-up material undergoing deformation is actually quite non-trivial. They set out to model the process, but given all the different variables involved, they decided to first simplify the problem. Instead of using rolled-up fabric, they started with a layered object possessing a similar geometry: a book. “For our experiments, we used flexible plastic sheets that we stacked up like the pages in a book, so that we could adjust and measure their collective properties,” says Poincloux.

The engineers looked at two factors in particular: the amount of force needed to bend a stack of sheets, and the best way to measure the energy lost to friction between pairs of contiguous sheets. To assess the first factor, they developed an experimental setup that could bend the stacked sheets and measure the amount of force required. “We initially thought that the force needed to bend two sheets was simply two times that of one sheet,” says Poincloux. “But we found that when you have several sheets piled up, the equation is no longer linear due to the frictional interaction between the sheets. That means the resistance to deformation increases faster than the number of sheets.”

Next they tackled the issue of friction. “We knew energy was being dissipated when we deformed the sheets, but we wanted to be able to precisely measure and predict just how much,” says Poincloux. He and Reis first tried to use computer models but found that most do not fully account for friction in configurations with many interfaces. “Bending a book—or in our case, stacks of plastic sheets—creates frictional forces between the individual sheets. That friction cannot be neglected,” says Poincloux. “We have some methods for measuring frictional dissipation but no existing mathematical model we could use.” The EPFL engineers therefore contacted Basile Audoly, a researcher at École Polytechnique, to draw on his work in modeling highly compliant structures. The research team was eventually able to predict the results of their lab experiments using a new theory that incorporates the effect of friction. “Our work could serve as a basis for describing the behavior of multilayer materials like graphene, or even geological strata,” says Poincloux.

The engineers also hope their discovery can help researchers better understand the mechanisms of shock absorption and design more effective dampeners, like mattresses and mats, with tunable energy dissipation.